This new section of the website provides SPACE for lengthy pieces. Initially they will report projects created by various Community groups in the Ascot area. Subsequently .... we cast the net wide for Readers contributions.

Here is a meander through one of five projects which friends and I created in this part of S.E. England during the past 30 or so years. It was a time of HOPEFULNESS that local communities could effect radical change, in their locality. We allied ourselves with like- minded initiatives in the UK and with Western European NGOs which demonstrated self-reliance, resilience, conflict resolution, social justice priorities.

Keen on SYMBOLISM, the images of Acorns, the Oak tree, Dandelions & Red Kites are present in much of our Environment language. The significance of ACORN and OAK TREE began with Steve Searle introducing us to the 100-year-old oak in Windsor Great Park. Dandelions continued the idea of small things sending down tenacious roots.

The RED KITE teaches visionary power and clear sight with strong observation habits while using effortless patience. She teaches the art of manoeuvrability and finesse to reach goals, and feeding the spirit and your life with much needed nourishment. (Animal Totems: Dictionary of Birds by StarStuffs.)

A Story of acorns, dandelions, red kites and an oak tree 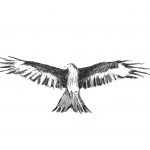 “Resilience & Self-Empowerment in a Time of Transition”

The ASCENT Network and the Festival’s focus is Climate Change; “Danger and Opportunity” the challenge of crisis and change… in all aspects of our lives. Since 2010, a few of us have been tilling the stony ground in this affluent part of the UK within which a Network of activists could seed and grow. At the 3rd AGM of the registered Voluntary Association, the 12-strong volunteer Core Group committed to create this FROLIC of a festival; cheery solidarity! So started our co-operative planning practice; arguing the connections, recognising a wide range of skills and experience, thinking systemically… evolving coherence of interrelated subjects; the Festival is a “product”. We’re making the “stuff” that Rob Hopkins – founder of the Transition Movement – recommends to introduce transition as a new concept to a local community. 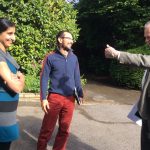 Local therapists, a jeweller, Runes Reader, second hand books… nothing new here… less common at such Fayres, were the topics discussed. They illustrated the potential links and present chasm between palliative, complementary and self-help approaches to health. Sophia Kelly, a therapist, challenged resistance to proven self-help. Spike Humphrey, a community campaigner, told the tenacity story of saving our local hospital. Anne Ayres, a Special Needs teacher, placed the practical task of building a wild-life garden alongside the researched benefits of time spent in Nature: nil cost! Lastly, Anne Yarwood, who organises from the inspiration of her imagination, praised still reflection, space to hear.  We’d started! Mixture of excitement and apprehension. Big effort by busy people to get the room ready. “Looks beautiful.” Indeed, as did we all!! And then…only a handful of people came! It was hard to believe. “Loadsa publicity” we all cried… consoling and criticising ourselves for choosing a charming village hall with NO passers-by. We rallied. Actually had great time together. Made 10 quid guessing the weight of the marrow! Packed up. Set off for the Carnival next day. 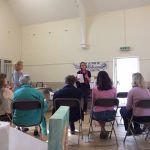 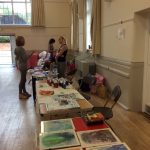 The next day, ASCENT is at the SUNNINGDALE AREA CARNIVAL,
Sunday 14th September.

Key objective: To let the wider community know about our existence!

Carnival theme: “Heroes” in recognition of WWI. Our new banner read “Speak Up & Speak Out: build Resilience & Self-Empowerment at a Time of Transition”.. same heroism.. cosmic conflict.. Despite the bold belief in open speech announced by the banner, once at the Carnival, we were not allowed to speak over the tannoy – “You’ll just make a political speech”. Under cover of our tent came first-time activists from the Ascot Gossip Girls. Amidst Ascot’s new-found petitioning capacity, the most vociferous are the 1000 protestors about the effect of tests by Heathrow to bring low-flying planes over Ascot; a NIMBY issue. (Nearby Windsor has lived with such noise for decades.) And that protest sidles up to the Third Runway at Heathrow issue: an economic and environmental debate too far, for this glorious summer day. We chatted to a few passers-by, but without stuff to sell, no competition for the candyfloss stall. Packed up… back to our supportive church, All Saints, to setup the next mid-week event… 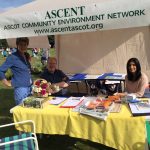 Continuing the theme of Heroes and Resilience, a young Israeli activist in Palestine detailed for us the Israeli Government strategy of House Demolitions. She educated us: from collapse of the Ottoman Empire, through the 1948 one-state solution, Camp David, to the start of house demolitions as government policy; land grabs, settlements. Israel is filled with fear… “After 70 years of indoctrination, Israel has lost its moral compass… we cannot touch the Holocaust. We are THE international victims… Israel needs victim-hood”. 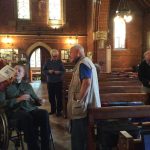 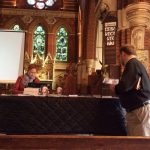 Two days gap and we were all prepared to mount the main event:

RESILIENCE & SELF-EMPOWERMENT IN A TIME OF TRANSITION.
Saturday 27th and Sunday 28th of September.

Key objective: Make available in Ascot an uncompromising message from a contributing author to the Fifth Assessment Report to the IPCC.

THE CALL of the conference. Dr Ed Hawkins, principal Research Fellow, National Centre for Atmospheric Science, Reading University: “Climate Change: Sorting the facts from the hype.” Followed by Peter Bert from Reading Greenpeace: “Save the Arctic; why the Arctic is under threat and how we can protect it.”

THE RESPONSE came from ASCENT pop-up speakers about local resilience and self-empowerment in action. They outlined what they do and were then available to chat with the audience whilst we all had lunch and a cuppa. Pop-up speakers included:

* Rev. Darrell Hannah CofE’s Disinvestment in Fossil Fuel campaign, which he instigated in the Oxford Diocese alongside Operation Noah nationally.

* Granny Kettle Wood campaign to hold the Royal Borough of Windsor & Maidenhead and the developers to account for the overnight destruction of 100 TPO registered trees. 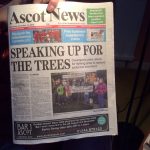 * Anne Yarwood used an extraordinary painting by a sixteen-year-old local artist to illustrate a key ASCENT commitment to the Inspiration of the Imagination. 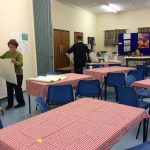 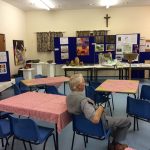 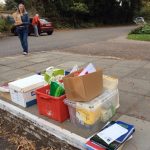 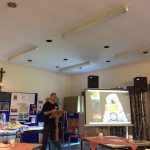 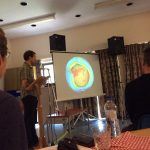 The next day was sunny. In the afternoon, guests had a choice of two explorations. One took us back into the church where the painter Antonia Rolls had placed her exhibition “A Graceful Death”. Down the brick path alongside the church to the hall was “Active Hope: how to Face the Mess We’re in without Going Crazy” based on Joanna Macey & Chris Johnstone’s manual for activism. A couple of the Core group had trained with both teachers. They had a living experience of Joanna’s vibrancy as an eco-philosopher, scholar of general systems theory and deep ecology. Another of the Festival team, as a member of GreenSpirit, had learnt some of Chris’s tools to face the impending crisis. In the hall, we painted and wrote a song, whilst another small group talked with Antonia in the church, hearing how terminally ill men and women (including her own husband) had asked her to paint them. When we gathered together a few hours later, Emily Blyth sang her song “The Seventh Generation” based on Nobel Prize winner Elinor Ostrom’s argument to plan for seven generations ahead. Antonia gave the message from the dying “I’ve LIVED my life. You go and LIVE yours”… The Festival was building it’s own life-story…about dying and singing and environmental stats, and saving Heatherwood Hospital and offering Reiki. The “risk” we’d taken in offering so many disparate topics over seven weeks, was emerging in performance as a coherent message. 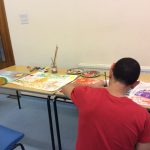 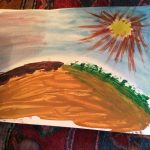 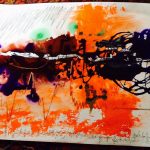 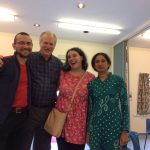 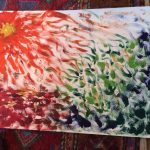 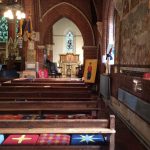 …Ah! the Red Kite, one of our guiding symbols, the Messenger in native American mythology. It nests in Sunninghill and flies in large numbers over Windsor Great Park

The following week we were ready for another event: A LIVING LANDSCAPE,
Thursday 2nd October

Key objectives: Place seemingly disparate topics in same programme in order to illustrate interconnectedness of the environmental challenges. Strengthen our capacity to address complexity in our local responses.

Two members of Wildlife in Ascot shared their experience of promoting biodiversity in our own gardens and in the neighbourhood. Wildlife in Ascot is one of ASCENT’s link groups; Anne Ayres and Anne Martin key contributors to Ascot and the Sunnings Neighbourhood Plan within which they fought for the inclusion of Green Corridor.

By this time we’d got used to the fact that we’d mostly attract people who know us and a small number of new-comers. This acceptance relaxed us and the last three Festival events were light–hearted, lots of laughs, amidst warm friendship; an important point!

And then we were into “LOVE FOOD: HATE WASTE” a Sunday afternoon tea party! 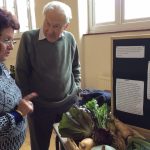 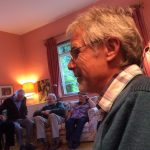 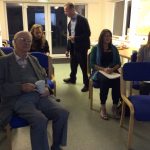 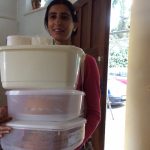 The next event was entitled ONENESS AND INTERCONNECTEDNESS: a look at the nature of reality as understood today.

Key objective: Encourage examining the relationship between science and spirituality.

The invitation drew men and women committed to spiritual reflection from a number of small local groups. Rev. Don MacGregor author of “Blue Sky God: the Evolution of Science and Christianity” lead the day. A number of our Network had previously listened to Don at Reading Wrekin Forum, and also at Philip Roderick’s Contemplative Fire gathering at Waltham Place. Don speaks about change “that needs to embrace the emerging scientific world view that everything is connected in a surging sea of interacting, nonlocal energetic fields and that consciousness is the source from which all emerges.”

Key objective: Allow space in our lives for stillness, silence, playfulness and revelling in the delight of painting.

Sarah wrote: – “Our natural state is one of joy and when we are not allowing joy to flow through us, we are blocking the most natural calling of Source. How often in the world of stress and angst do we allow ourselves to embrace joy and remember its enfolding embrace? This is a day for fun and meditation. A day for allowing ourselves to be free and listen to the calling from nature. … to play with paint and loosen our minds”. Sarah quoted from John O’Donohue: “Awake to the mystery of being here, and enter the quiet immensity of your own presence.” One painter said “thank you for the shared group energy and the creative flow”. A joyous day. 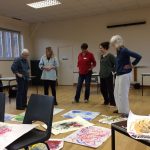 November 9th, the final event. Six weeks on from the September 12th launch. We had invited six groups in ASCENT to report their experiences of –

Key objective: To analyse the Network’s experience of challenging Power, as community activists.

This determination has become one of ASCENT’s defining objectives as we connect with link groups locally. It’s a new phenomenon, first demonstrated the Save Heatherwood Hospital campaign which attracted 23,000 petition signatories. Other examples:- support for Granny Kettle Wood opposition to tree destruction and inappropriate mansion development; the unprecedented outcry when access to the Heath was closed for certain race meetings, without pre-warning, by the Ascot Authority. More recently 1,000 locals met at the Race Course holding Heathrow Authority to account about the Noise issue. Voracious stuff in which the local Streetlife, social media vehicle is finding a purpose. In particular, “Mal-Development” is a vote catcher around here. Another species of raptor called “developers” fly above many Victorian houses with large gardens, and over Green Belt spaces.

WHAT HAPPENED & WHAT WE LEARNT

“A very good start to plan future action for a real campaign in Ascot, addressing such fundamental questions.” ~ Margery T.

“When I told other activist groups about the Festival, there was praise that you had created so much. In particular, I admire your collaborative, sensitive manner of working together.” ~ Eve: Climate Nomad who walked around England last year, engaging with people that she met about Climate Change.

* Climate Change IS  happening. 95% sure caused by man-made emissions of greenhouse gases.

* Drought & flooding in some regions globally

* Do not protect the status quo as it has brought this state of Climate Change: real actions to produce measurable results are required now.

* Expand the use of renewable energy and low-carbon power generation.

* Communicate rather than Commute.

* Keep warm with a friend and save energy.

The Mantra is “Fossil freeze. Solar thaw. Keep it in the ground.” 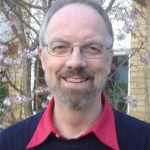