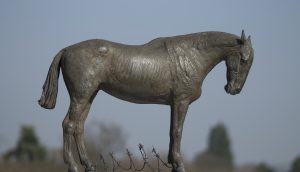 Just 62,000 equine recruits returned from battlefields of France and Flanders out of 1m enlisted

A new memorial is being unveiled near Ascot Racecourse today paying tribute to the animals that served so bravely during the First World War.

The bronze sculpture of a horse – emaciated, head bowed in sorrow for fallen comrades, a tangle of barbed wire lying at its hooves – was designed by sculptor Susan Leyland and will appear on the Heatherwood roundabout close to the famous racetrack.

The statue was cast at a foundry in Scotland at a cost of £300,000, weighs one-and-a-half tonnes and stands eight foot six inches high atop a nine foot plinth of Portland stone.

It has been christened “Poppy” after the name proved the winning entry in a competition organised by Britain’s Brownies and Guides.

Purple poppy rosettes will be sold in memory of military animals in time for 23 August, a new national day in their honour, with the funds raised going to the Household Cavalry Foundation and Mane Chance Sanctuary.

The memorial remembers the 1m British, Allied and Commonwealth horses, donkeys and pack mules who served in the bloody conflict a century ago, only 62,000 of whom returned from the battlefields of France and Flanders.

The beasts were used as cavalry mounts, to drag heavy artillery into position and carry supplies, ammunition and even the corpses of dead soldiers.

Just like their human counterparts, the animals suffered terrifying conditions as a result of loud shellfire and rattling machine guns, many dying in the mud from bullet wounds, disease, starvation, exhaustion and pneumonia.

Their story was memorably told in Michael Morpurgo’s 1982 novel War Horse, the subject of a spectacular National Theatre production in 2007 and a star-studded film adaptation by Steven Spielberg in 2011.

The memorial is intended to ensure their vital contribution to the war effort is never forgotten.

IMAGES – Folio Society and the House of Illustration 22 Feb 2016 :- These are the 25 Book Illustration Competition finalists in the running to illustrate the Folio Society’s new edition of Michael Morpurgo’s much-loved children’s book about a farm horse caught up in the first world war. The winner announced on 25 February 2016 was Alan Marks.