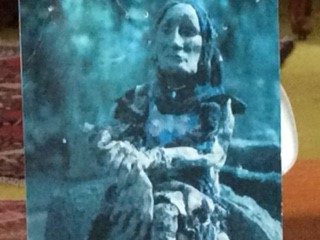 The Crone Goddess, together with the Mother and Maiden Goddesses, represents part of the circle of life.

In today’s society which worships youth and beauty, the Crone Goddess is frightening and misunderstood as she represents destruction, decay and death.

Positively, she’s depicted as a Grandmother, wise woman, or midwife.  Crone derives from ‘crown’, suggesting wisdom emanating like a halo. Her child bearing days over; she’s the wisdom keeper, seer and healer and midwife, whose knowledge is sought to guide others during life’s hardships and transitions.

The Middle Ages Church feared these wise women and the esteem from their communities. Many were killed during the Inquisition and the wise woman of old was relegated to the Wicked Witch and Hag Archetype of fairy tales – the meanings of witch and hag deriving from ‘wit’ denoting wisdom and ‘hagio’ meaning holy. Today as women live longer and take more prominent roles within society the tide is starting to turn as they start to reclaim their power.